If your EC2 virtual private server instance performance has suddenly dropped off a cliff edge then it may be worth checking the ‘Average Write Latency’ metric.  This metric shows the time it takes to write to your hard drive.  The lower the latency, the faster the write, the sooner your server can move onto something else.  This is a very important metric as a low latency means better performance and the opposite is also true.

We recently had a sudden and unexpected performance issue with an EC2 Linux instance and diagnosed the issue to the read / write latency of the hard drive.  The server needed to use the hard drive but the latency was slowing everything down.

Further investigation revealed a problem with the gp2 burst-bucket.  AWS designed their SSD hard drives to have bursty I/O up to 3000 per second and then replenish it during quieter times at a rate of 3 per configured GB per second.  But we had completely run out of burst with no sign of replenishment, causing the high write latency. 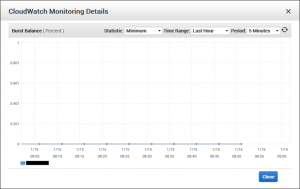 The Burst Balance was at zero leaving us with no available I/O per second causing the write latency to increase and slow the server down.

We decided to stop the instance and start it again.  This is different to a reboot as the instance is started in an undefined location in the data centre and will likely use different hardware. 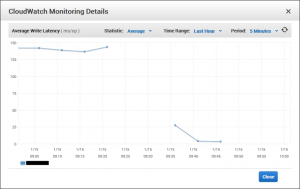 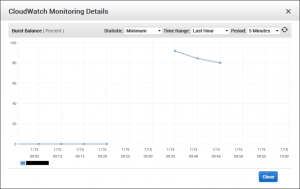 The Burst Balance went from 0% to 97% although it started declining immediately.  Possibly pointing to the actual cause of the burst balance depletion. 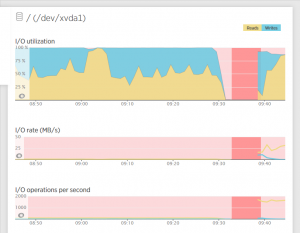 The poor instance performance was a direct result of high write latency caused by the depletion of our available IOPS.  Further investigation is required to see why that happened but having the option to stop / start the instance to renew the burst balance is invaluable to bringing the server back within normal operating standards quickly.

We have many years experience with Amazon Web Services, Linux administration and monitoring, server and website performance.  If you would like to talk to us regarding AWS or Linux servers please feel free to contact us.

Want to join the discussion?
Feel free to contribute!

The 5 vital aspects of an effective email marketing campaign
Scroll to top
This site uses cookies: Find out more.